Monday morning came and everyone was still hung up on our trip to Pamplona. I had just woken up from hearing alarms ringing, rushing footsteps, locker keys turning, and people talking -the short vacation was done and it was time to get back to work. Breakfast was usually lively and full of stories from different people; but today everyone seems a bit sluggish and quiet. It was obvious that everyone needed a little push to get things going.

The past week was full of sketching, talks, and other works to lay our ground on what is to be done on the second week. We studied the houses within the village and other neighbouring towns to get a grasp of the area’s identity and architecture. Our first course of action was to put final touches to the works we did the previous week. This part of our work became a bit tedious and dull as the pace of work was a bit slow and interaction between the students was limited to asking questions about the projects.

Later that week, the professors decided to introduce the new projects. The students were split into different groups, each focusing on a specific node within the town. Each of these nodes are areas of Amaiur that need improvement or redevelopment. This was the push everyone needed. 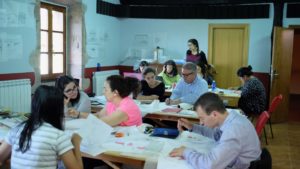 After finishing the giving us our assignments, each group went on to study and analyse their respective nodes. My group was focused on the redevelopment of the church area. This was the most challenging node. The church area is outside of the town proper so the connection between the church and the town wasn’t quite as strong as compared to towns where the church is at the center. There was a need to connect the town to the church while keeping the sanctity and identity of the area. There was also a previous proposal for a massive building made of glass and wood. We discussed that it was not in line with the identity of the town, nor the whole valley for that matter. Tourism was decidedly a big consideration in our project since the church area will act as a gateway to the town proper. The group decided to create sprawling spaces that will improve on the current proposal while still maintaining the requirements of the mayor. Some of the open spaces will be redeveloped to create pleasing views framing the beautiful landscape beyond. 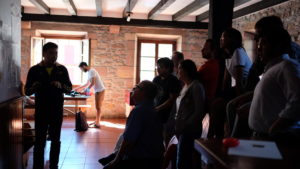 One group was in charge connecting the town plaza, school playground, and the fronton building which was completely out of context with the identity of the town. There was a need to improve the facade of the building with minimal cost. The areas around Mercedez street was a collection of different structures without any relationship to each other; creating one mess of a street. The group focused on connecting these areas; making the street, and their node whole.

All of the nodes are situated in difficult locations, sometimes with harsh topography, and have difficult problems in need of brilliant solutions. Each team had to work on their areas with vigor and determination or else the projects may not see fruition. We were all given less than 4 days to finish the tasks and produce multiple architectural drawings  including master plans, elevations, sections, axonometric drawings among others. 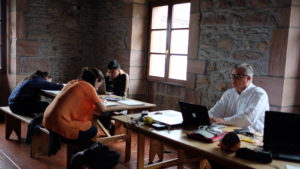 The planning stages were quite difficult, especially for groups with bigger scopes. There were a lot of great ideas from different people. Expectedly, these ideas would tend to clash and so disagreeing with one another was to be expected. Creating a master plan was difficult.  In the end, after lengthy discussions and debating, all the groups finally settled for a plan that was to our satisfaction.

This exercise showed everyone’s character, especially under stress and time pressure.  It showed our active decision: to have set aside our individual opinions and think as part of a group who were willing to work together and to accept changes and criticism to reach one goal. 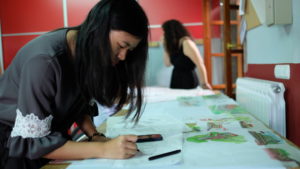 It was amazing to work with people from different educational backgrounds and perspectives in architecture. We learned more from each other every single day we got to work together.

That, to me is the true value of summer schools like this. Yes, we learned different lessons from speakers almost everyday, but it was in my interaction and communication with the other delegates and professors that I found most eye opening and valuable. Being able to see architecture through the eyes of our colleagues and professors was truly something priceless I could keep with me in my career.

We continued to work until we finished all the architectural drawings required by the professors. Soon, it would be time to present all our hard work to the townspeople of Amaiur.